Pic Stories a picture is worth a thousand words

Its been over 7 years since I traveled in India. Of course you immediately notice the  many ornamental changes but have to dig deeper to identify the infrastructural and attitude changes.

I flew into Mangalore which of course worried the family given the recent accident at this airport.

As my sister lives close to the railway station it is walking distance. An interesting exercise walking along the tracks and onto the platform

Visiting the south in the throes of the monsoons has its own charms. It rained most of the day I started on my train journey.

Mangalore is a great place to start a train journey. A long time ago it used to be a terminus, which many trains considered it to be its final stop before turning back. Now majority of trains merely pass through it having been hooked up to the Konkan railway.

I insisted on boarding one from my past that actually started from Mangalore station – the Madras mail for the old timers which would arrive in Calicut early in the evening.

In India stations are a destination in themselves, exciting  if you are in to people watching. Of course it takes a experience to filter out the unplesant. It was interesting to see how people spent their time waiting to start off on their journey. 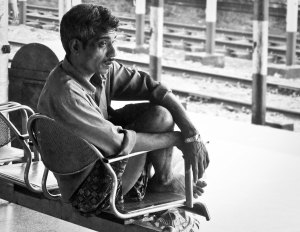 I have always enjoyed watching the rolling stock and engines at work and found that age has not  mellowed that interest. Much to the dismay of my dad I got off the train to watch the engine move around some of the compartments. 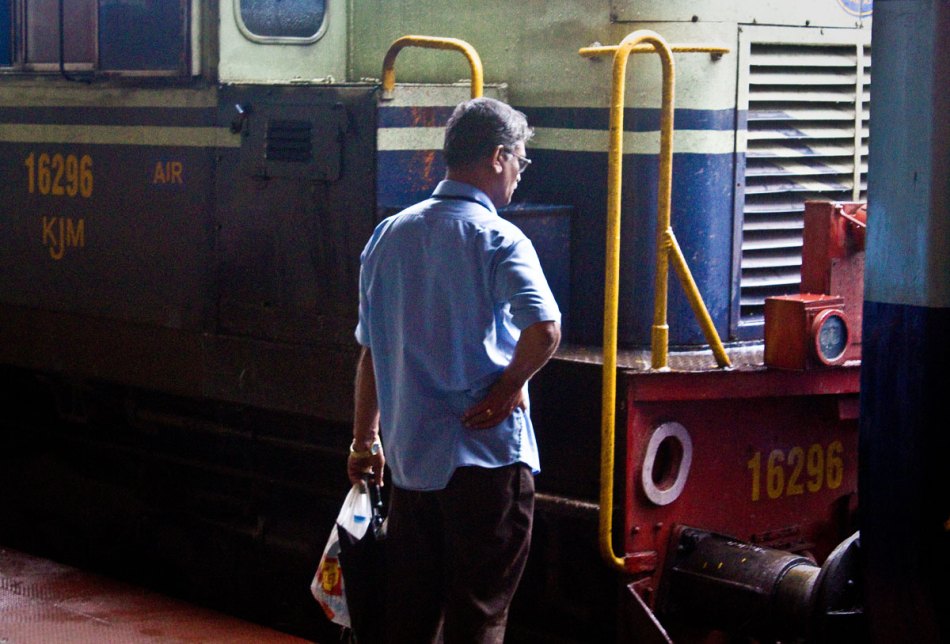 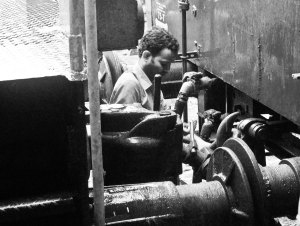 Finally the train pulled out of the station starting another journey.

Rain came down at full blast as the train pulled away from the station.  In fact it had been raining for the last couple of days which resulted in flooding in most parts of Kerala. Nothing new I suppose and everybody seems to be taking it in their stride.

Rain did not seem to stop  most people. The tea boy finished his chores bid good bye to those leaving and went back to await the next train. The little boy waited patiently while his father fiddled with the cell phone while trying to prevent it from getting wet. 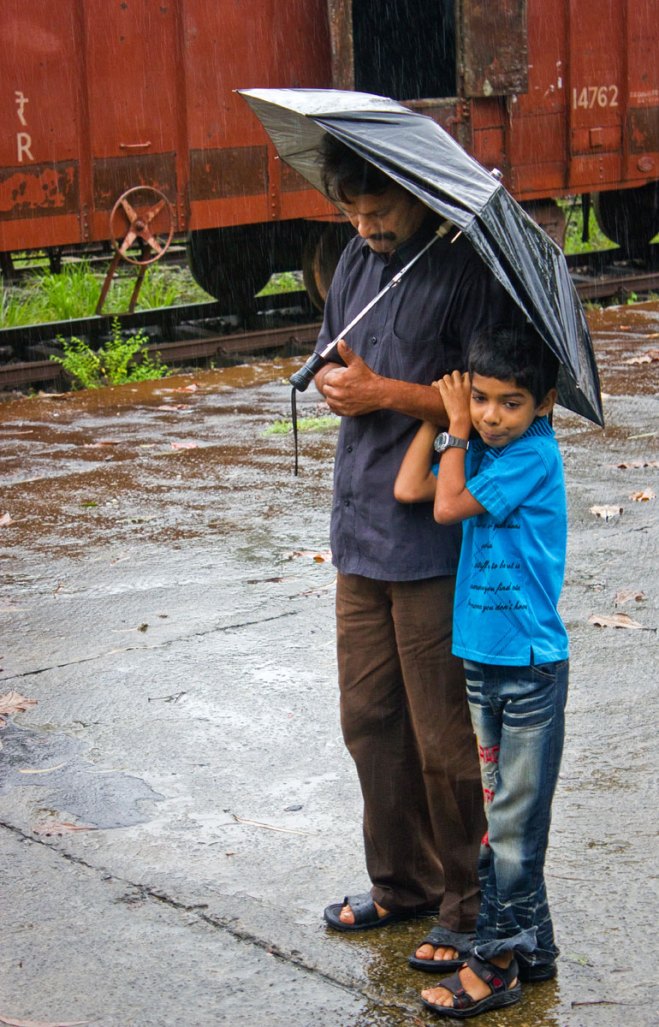 Kerala basically has two seasons – rain and no-rain.  It rains incessantly during the monsoon season. Rivers are swollen and takes on a red hue contrasting with the greenery around. Roads and paths become streams and rivers… but life goes on. 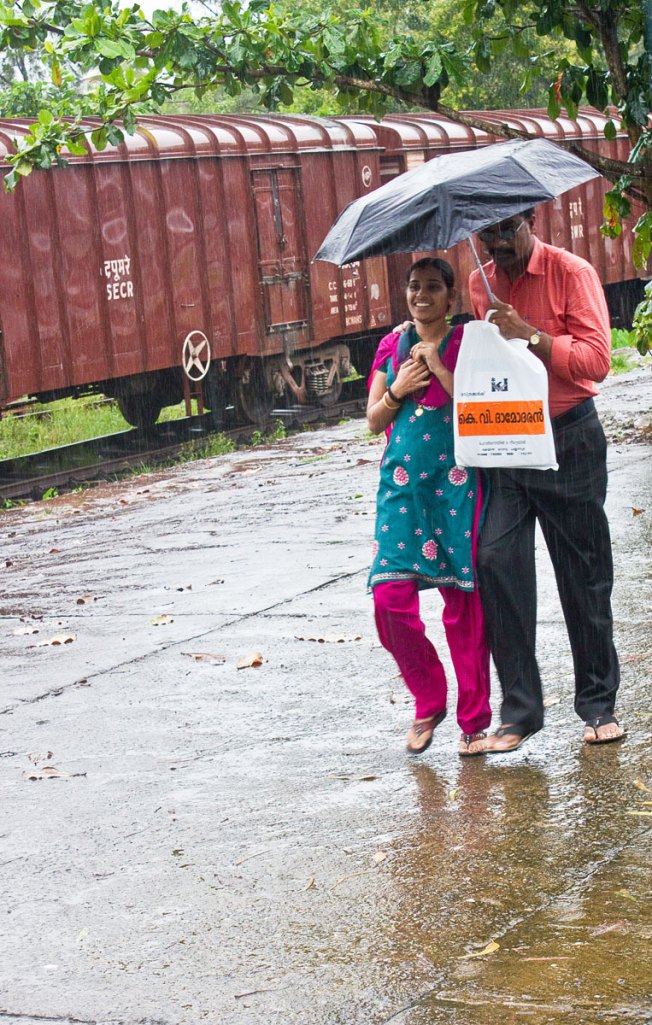 Calicut Finally or Kozhikode as it is locally known. It was a pleasant 5 hour journey.  Fortunately rain had stopped by then. 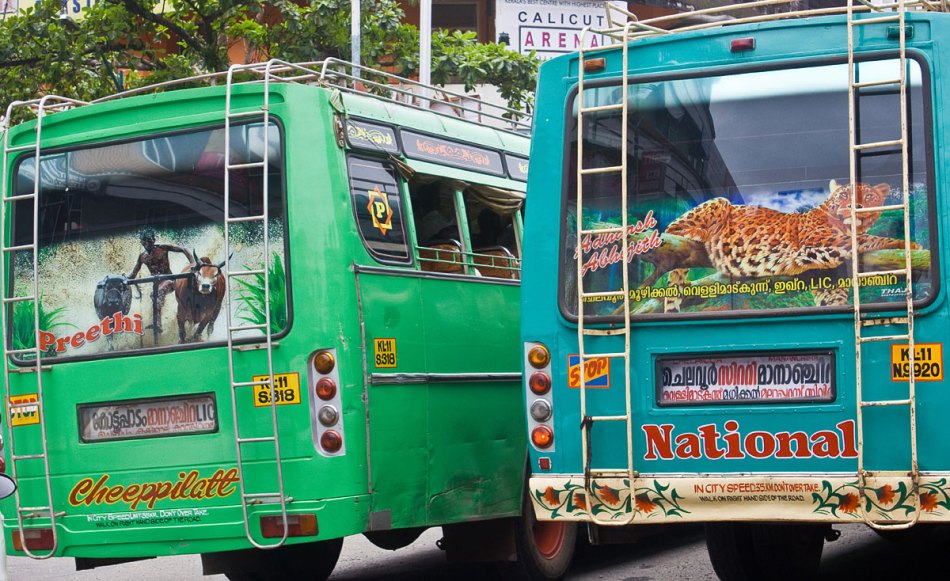 Despite several beautification and building projects, little seems to have changed in downtown Calicut. Same old buses and shops. 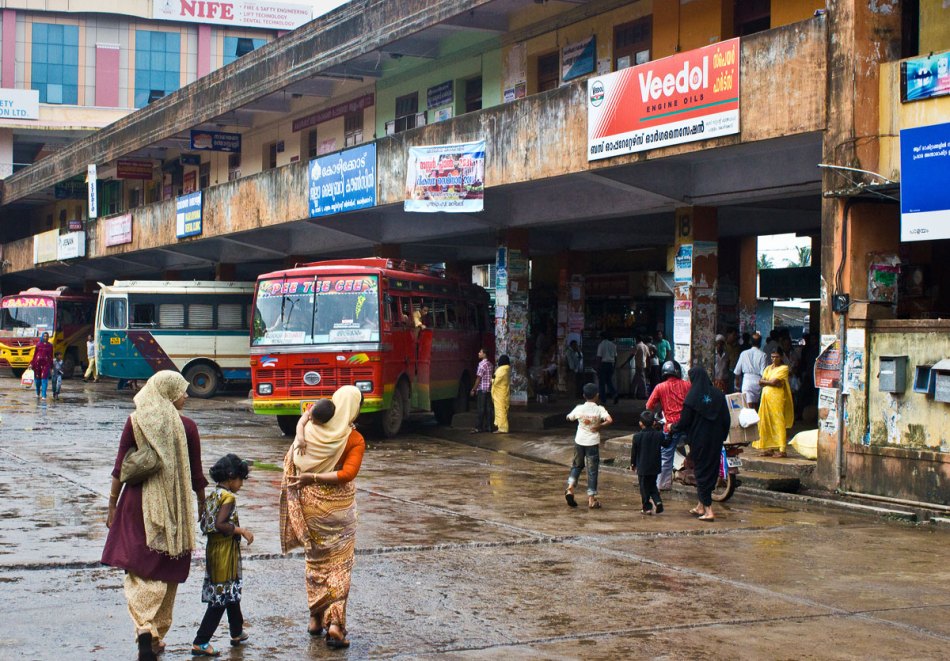 Walking past the old bus-stand brought back memories of running to get the last bus back to the college. REC – Mukkam cried out the conductor. Nothing had changed – they still do.

The old market place behind the bus stand showed little signs of change; bustling with activity as usual

The entrance to SM street looked more or less the same. I rememberd some of the shops from the old days including ‘Snow white’ the launderers

The Mananchira maidan next door and the old park restaurant area had a new look.

Calicut for me brings back memories of banana chips and spices. One of the first things I purchased was a large bag of chips to munch away

Banana chips, despite the advent of new technologies continue to be made traditionally by hand. Fried in a large cauldron of oil burning coconut husks. Aroma of coconut oil in the air. 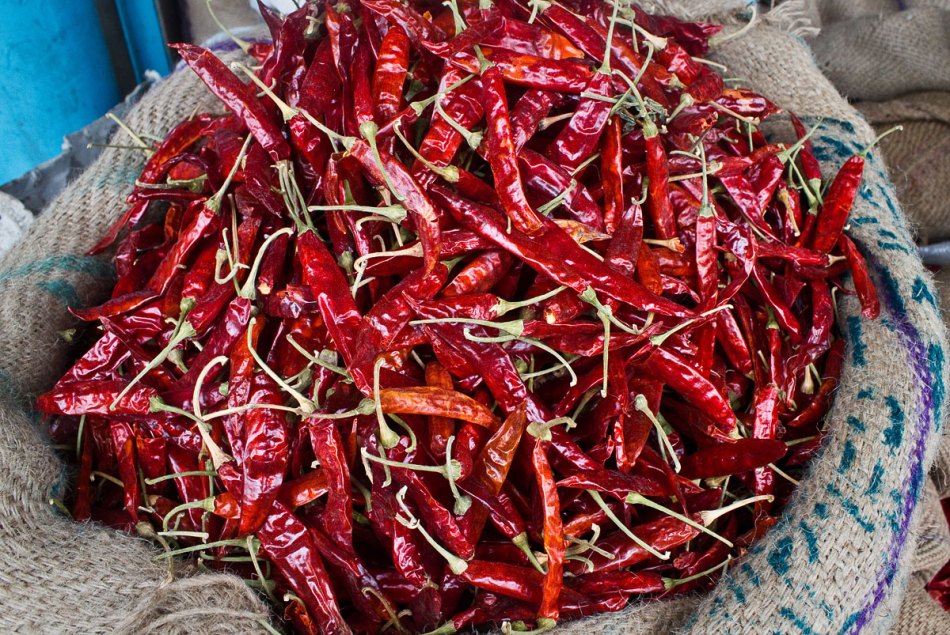 Coconut, spices, pepper, and chillies produced in the area and hills beyond are traded in the Calicut bazar. 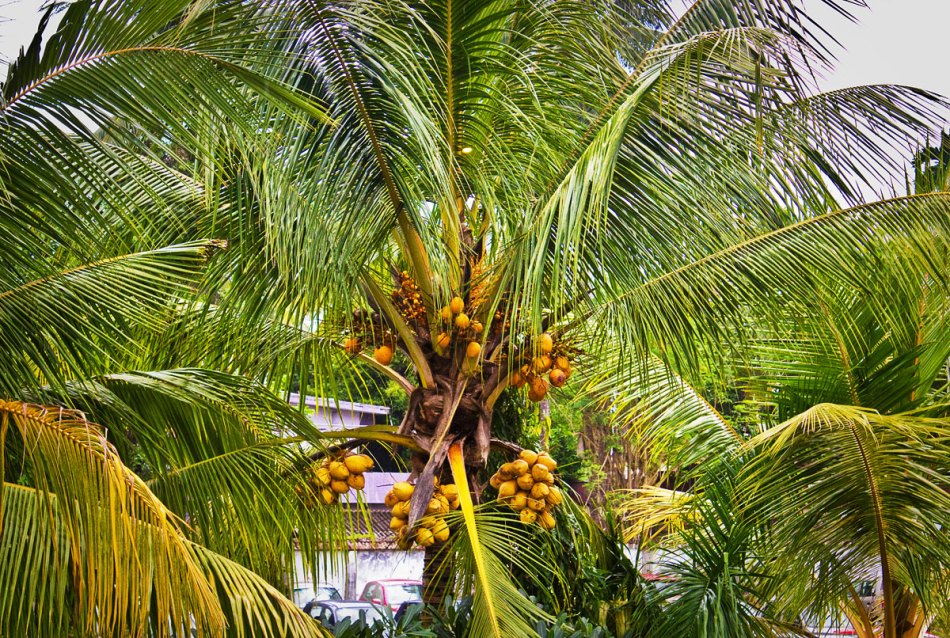 A trip to Calicut is not complete without checking out the beach. It has changed over the years with the several beautification projects (opportunity for the authorities to make some money). But on a sunday it is as crowded as ever. It does seem to appear a little more neater, cleaner and organized. Gone are the days of shady activities given the fact that it is lit up like a christmas tree 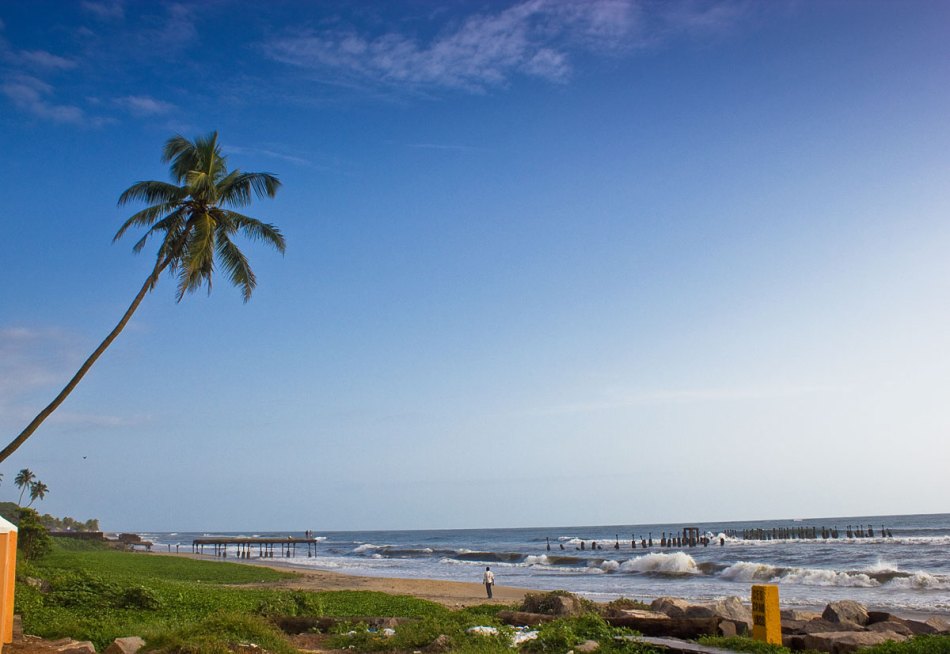 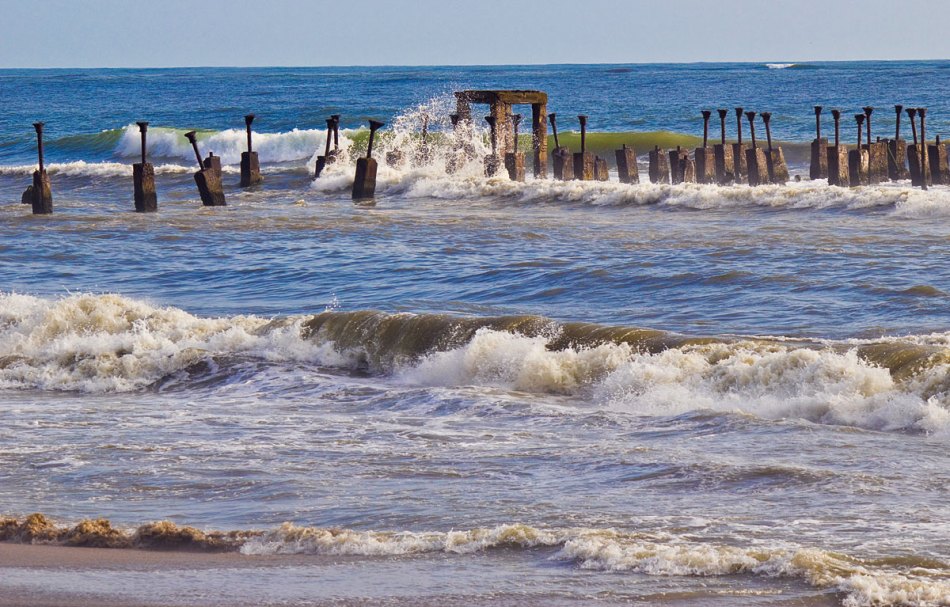 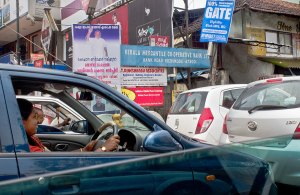 Many changes are obvious, like the large  ‘aunty’s’ driving tiny cars rather precariously

Or the new colourful buildings downtown. This particular one houses the Malabar Palace which does have a good restaurant, though poor service. Loved the break-fast buffet here.

Many others blissfully remain the same.  Be it guys  riding around on their motor bikes ogling at the chicks. Or the totally out of place architecture of the Asoka hospital near Mavoor road.

The ‘kappalandy’ guy has not changed either. Perhaps his dreams have…

Many of the old businesses continue to eke out a living. Similar people in an old tire retreading business and an handicraft shore, where I have spent many a hard earned dollar. 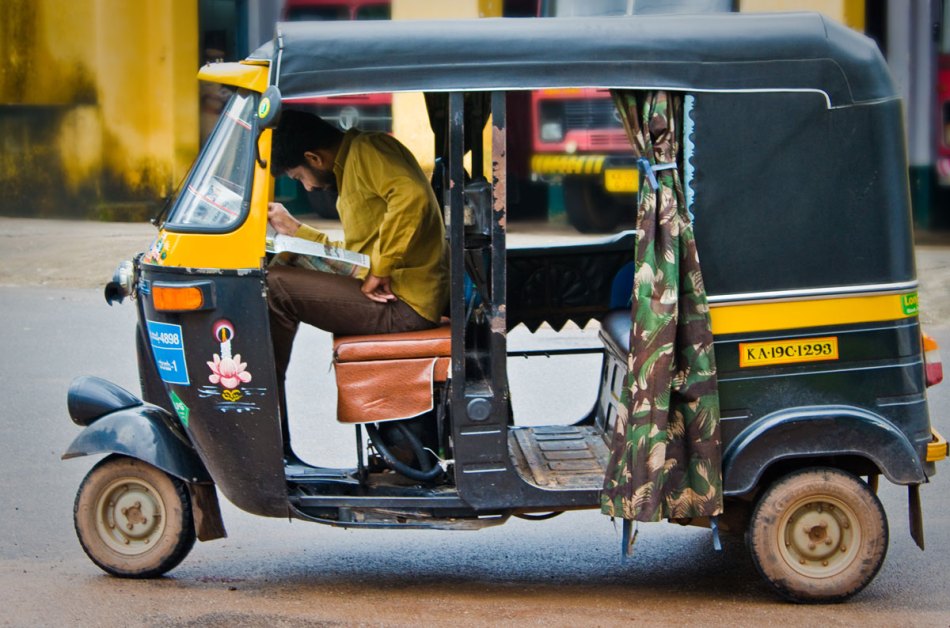 Illiteracy by traditional measurements are high, yet reading the daily newspaper is more important than attending to business 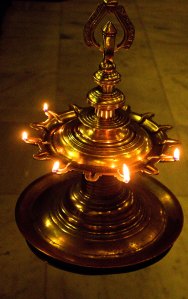 Time to move on

Bye till our next stop

This entry was posted on August 22, 2010 by jacobs4blog. It was filed under Uncategorized .